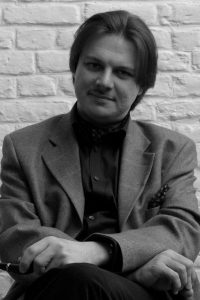 Pianist, musicologist, poet Victor Chestopal was born 1975 in Moscow into a family of musicians, writers, scientists and artists.

His first piano lessons, at the age of five, were under the guidance of his mother, Professor Victoria Yagling (1946-2011): a cellist and composer, a former student of Mstislav Rostropovich. At the age of six, Chestopal was enrolled as a pupil at the Gnessin Music School and three years later at the Central Music School of the Tchaikovsky Conservatoire. There, his teachers were Tamara Bobovich, Alexander Mndoyants, Professors Lev Vlassenko and Mikhail Pletnev.

At the age of twelve, Chestopal performed Mendelssohn’s Piano Concerto No. 1 in G minor in Saratov and the following year gave a recital at Moscow’s Rachmaninoff Concert Hall.

In 1990 Chestopal won the First Prize at the “Carlo Soliva” International Competition in Casale Monferrato (Italy), and in 1991 played before Pope John Paul II at the Vatican as a soloist in Prokofiev’s First Piano Concerto with the Russian National Orchestra conducted by Mikhail Pletnev.
Victor Chestopal has lived in Helsinki since 1990 and became a Finnish citizen in 1997, graduating with a Master’s degree from the Sibelius Academy in 2001. His studies at the Sibelius Academy were under the guidance of Professors Vitali Berzon and Erik T. Tawaststjerna.

During his studies at the Accademia Pianistica “Incontri col Maestro” in Imola (Italy), 1992-1997, and at the Hochschule für Musik Franz Liszt in Weimar (Germany), 1995-1997, Chestopal was tutored by Lazar Berman.

Victor Chestopal also became a Doctor of Music at the Sibelius Academy. The doctoral degree comprised five recitals dedicated to the cornerstones of the piano repertoire (Bach’s Goldberg Variations; Beethoven’s Grosse Sonate für das Hammerklavier, op. 106; Schubert’s Sonata in B flat major D 960; Brahms’ Sonata No. 3, op. 5; Liszt’s Sonata in B minor, among other works) and a doctoral thesis entitled “Temporal correlation in the Goldberg Variations”.
In 2001-2002, Chestopal had an opportunity to play several times for Mstislav Rostropovich.

A prize-winner of several major piano competitions Chestopal has performed all over the world, appearing in concert halls such as the Palais des Beaux-Arts in Brussels, Salle Gaveau in Paris, Schauspielhaus in Berlin, Herkulessaal in Munich, the Great Hall of the Moscow Conservatoire, Kolarac Hall in Belgrade and Finlandia Hall in Helsinki.

In the domain of chamber music, Victor Chestopal collaborated with Victoria Yagling (over 20 years), Arto Noras, Michael Flaksman, Xavier Phillips, Pavel Berman, David Grimal, Tokyo String Quartet and other artists and ensembles.
Chestopal has recorded for Melodiya, Russian Disc, Ricercar and Record Production of Radio and Television of Serbia (Rachmaninoff’s Piano Concerto No. 3, with the Serbian Radio and Television Orchestra, conducted by Aleksandar Markovic).
He also has live recorded one recital in Liège (Grieg, Schumann, Yagling) on two CDs by Pianos Wielick.

Chestopal has been active as a pedagogue, conducting master-classes at several European universities and conservatories.

Since 2018 he is a piano professor at the Conservatoire Royal de Bruxelles where he is Head of Piano Department and he also teaches at Accademia Perosi (Biella, Italy).
He has led annual piano master-classes in Liège since 2007, and he teaches in French, English, Italian, German, Swedish and Russian.

Victor Chestopal is regularly involved in charity projects: he gave performances for “Save the Children”, “Mary’s Meals”, “Arche”, “Deutsche Stiftung gegen Mangelernährung” and other organizations.