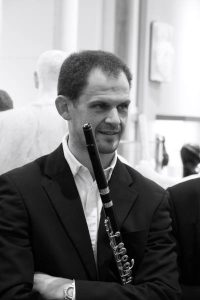 Pierre Pouillaude began music at the National Conservatory – Conservatoire à Rayonnement Départemental in Cambrai. After obtaining a gold medal in transverse flute, chamber music and musical training, he entered the class of Philippe Pierlot and Pascale Feuvrier at the Conservatoire à Rayonnement Régional in Rueil-Malmaison. There he won a Prize of Excellence and joined the National Superior Conservatory of Music and Dance of Lyon – CNSMD, in the class of Philippe Bernold, Emmanuelle Réville, Julien Beaudiment and Gilles Cottin where he obtained his Higher National Diploma of Music and his Certificate of Flute ability.
Pierre Pouillaude participates in many festivals, Aix-en-Provence, Chaise-Dieu, Côte-Saint-André, Lacoste, the Musica de Strasbourg contemporary music festival, the Flam festival, musical meetings in Haute-Gironde. In 2009, he was a finalist in the Henri Tomasi international wind quintet competition in Marseille and from 2009 to 2014, was part of the Carpe Diem ensemble under the direction of Jean-Pierre Arnaud. He performs regularly in recital with Amaury Breyne with whom he recorded “Catharsis”, the 27th volume of the series “Musicians and the Great War” published by Hortus.