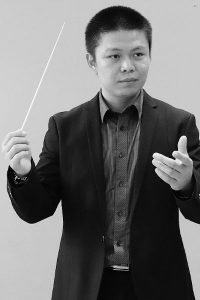 Since 2014 Luping Dong has been in charge of the Arcama CNRS
vocal ensemble, and between 2017-2019, he conducts Lyon Men’s choir. He is the co-founder of the Riff ensemble (contemporary music) based in Geneva.

He is passionate and highly embedded in XXth and XXIst century music, both in choir
and ensemble pieces, from repertoire to world premiere.
His symphonic experience is with the National Ballet Orchestra of China,
the Geneva Chamber Orchestra, the MAV symphony orchestra in Hungary, the Kiev Symphony Orchestra in Ukraine, the Pazardjik Symphony orchestra in Bulgaria, the Cannes Orchestra, the Biel Opera Orchestra in Switzerland, the Orchestra of the National Opera of Constanţa, etc.
Supported and advised by Dun Tan (Composer and conductor), Qigang
Chen (Composer). He took conducting courses with Laurent Gay, Nicole Corti, Jukka – Pekka Saraste, Franco Trinca, Nicolas Pasquet, Johannes Schlaefli, Rodolfo Fischer, Guy Braunstein, Vincent de Kort and Wolfgang Doerner.

Luping Dong was born in China in 1989 where he began studying music at an early
age. Between 2007 and 2010, he began studying conducting and choral conducting at the National Conservatory of Music and Dance in Xi’an, capital of Shaanxi province in China.
He improved from 2010 to 2013 at the Conservatoire National à Rayonnement Régional (CRR) in Toulon where he took courses in choir conducting, singing, piano, composition, etc.
In 2013, he entered the National Conservatory of Music and Dance (CNSMD) in Lyon in the class of Nicole Corti.

Since 2014 Luping Dong has been in charge of the Arcama CNRS vocal ensemble,
and between 2017-2019, he conducts Lyon Men’s choir.

Luping Dong has collaborated with several choirs and orchestras including the Britten Choir, the Cannes Orchestra, the National Ballet Orchestra of China, the Biel Opera Orchestra in Switzerland, the Geneva Chamber Orchestra, the Orchestra of
he National Opera of Constanţa (Romania), the Radio Philharmonic Orchestra of Amsterdam.
Luping Dong has participated in concerts at the Auditorium and Opera of Lyon, at the Toulon Opera, at the Philharmonie de Paris, at the Amsterdam Concertgebouw…
He participated in many conductor competitions, such as Lake Como international conducting competition(semi final) and Malta international competition.