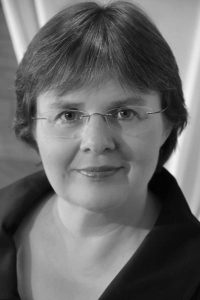 A musician who is as passionate as she is fascinating, rebellious and overwhelming, utterly convincing in her unceasing quest for artistic truth. The critics speak of a “captivating” artist.
The Belgian pianist Kornelia Ogorkowna was born in Katowice, Poland, in a family of musicians.

She successfully completed higher education in Poland, but her uncompromisingly avant-gardist worldview of life and music led her to leave her homeland. She undertook her studies in Paris, in 1984, and she obtained the “Diplôme Supérieur d’Exécution de Piano” with jury’s special mention from the Ecole Normale de Musique de Paris / A. Cortot, and in 1990, a Master’s degree with distinction from the Royal Conservatory of Music in Liege, Belgium.During her studies, Kornelia Ogorkowna won several awards, including First Prizes at the International Piano Competition in Epinal, the European Music Institute Competition in Besançon and the Gunther Competition in Brussels, as well as Second Prizes at the European Piano Competition and the International Viotti-Valsesia Competition.

As a concert soloist, she has played with several orchestras in Europe (Belgium, France, Poland), and in Asia and South America, under conductors such as Y. Simonov, T. Guschlbauer, P. Bartholomée, J. Mercier, M. Fuzer Nawi and D. Del Pino.
She has made guest appearances at numerous festivals such as the Festival of the Walloon Region, “Festival des Minimes” in Brussels, Krakow Spring, Chopin Festival in Duszniki-Zdroj (Poland), Flaine Festival (France) and the International Piano Festival in Kuala Lumpur (Malaysia).

Next to her concerts performances, she pursued a teaching career in Belgium, both at the Liege Royal Conservatory and the Higher Institute of Music and Pedagogy at Namur. She is teaching today at the Geneva Conservatory of Music, is the guest of many master classes as well as a member of the jury of international competitions.

From her homeland, Kornelia Ogorkowna maintains a close affinity with Chopin, of whom she gives a very personal and modern vision, though always respecting the Polish composer’s spirit. The same destiny as Chopin, from Poland to France, provides her with the freedom of expression necessary for present-day musicians in order to successfully tackle the large repertoire, and in particular the works of Chopin, that never lose their charm.