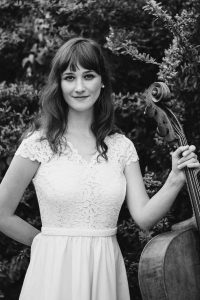 The cellist Katharina Deserno, born in Frankfurt on the Main, is famous for her wide repertoire and her exceptional concert programs as well as for her sensitive and expressive playing. Her International concert activity as soloist i.a. with the Spanish National Orchestra, as chamber musician, and, in particular, since more than 10 years together with the pianist Nenad Lečić is documented in numerous world premiers of works written for her; tours and festival invitations in Europe and South-Korea, radio broadcasts at WDR, Deutschlandfunk, Radio Clasica, ORF i.a. and CD-productions. Reviewers are talking about “perfect playing”, “perfection of technique” and “a wonderful program” (Rondo Magazine). On her Debut-CD in 2011 she presented music for cello and piano and cello solo by women composers around Clara Schumann and on following recordings for Kaleidos and Wergo music by Sergei Rachmaninov, Alexander Gretchaninov, Konrad Lang and Ludwig van Beethoven and chamber music by Barbara Heller; all recordings include world-premieres and have been praised highly by the press. On her next CD which was just recorded she will present music for cello solo by Violeta Dinescu and Johann Sebastian Bach.

Katharina Deserno received her artistic education in Frankfurt, Paris and Cologne from Maria Kliegel, Gerhard Mantel and Philipp Muller; further inspiration and artistic impulses from Jano s Starker, Siegfried Palm, Wolfgang Boettcher, György Kurtag i.a.
During her studies she was already working as assistant of Maria Kliegel. Being one of the youngest teachers, she started teaching a cello class at Cologne University of Music and Dance in 2008. Meanwhile, many of her students are prizewinners of international and national competitions. Katharina Deserno is regularly invited to give master classes for young cellists.

In 2014 Katharina Deserno received her doctorate in musicology with distinction. Her book about the History of Women Cellists was published in 2018 by Böhlau. Her teaching book for young cellists, published by Schott, was a music Top-Seller.

In 2015, Katharina Deserno was offered a chair as professor at Frankfurt University of Music and Performing Arts. She is artistic director of Yehudi Menuhin Live Music Now Frankfurt. She plays an Italian Violoncello by Carlo Antonio Testore from 1712 which has been generously provided to her by a German Maecenas.