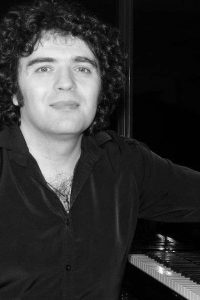 Born in 1976 in Bucharest where he received his first piano lessons at the age of 7 and a half with Veronica Gaspar. From the age of 10 already performs as a soloist, wins several national competitions and even plays with the Romanian National Orchestra in a concert broadcast live on television.

In 1991 he moved to Belgium and continued his studies at the Royal Conservatory of Liège where he successively won the highest distinctions, in the classes of Jo ALFIDI and François THIRY (Piano). He also obtained the grand prix for piano at the International Music Conservatory of Paris (With Colette LASSANCE and Pascal GODART). He also receives advice from Alan WEISS. He follows a high improvement course with Bruno MEZZENA in Pescara (Italy).
Since 2001, he has been invited to perform as a soloist or in chamber music in Belgium (Palais des Beaux-arts Bruxelles and Philharmonique de Liège, Flagey, Festivals de Wallonie, etc.),
Luxembourg, France, Romania, Italy, England … In 2006, he won the 1st prize at the GRETRY competition and the 3rd prize at the International SAN-MARINO competition.

Invited as a soloist at the DURBUY music festival, he distinguished himself in a concert in sharing the stage with Abdel RAHMAN EL BACHA. With his wife, the soprano Andreea Minculescu, they form a duo which gives numerous concerts in Romania, Belgium and France.

In addition to his concerts, he devotes a lot of time to teaching, for which he is truly passionate. He gives Master-classes in Romania and France and during his educational activity he was led to collaborate with François THIRY at the Royal Conservatory of Liège and with Jean-Claude VANDEN EYDEN, Johan SCHMIDT, Mickaël FAERMAN, Dominique CORNIL and Eliane REYES at the Royal Conservatory of Brussels.

He regularly shared the stage as a soloist or in duet with Laurence KOCH, Sebastien WALNIER and Thibault LAVRENOV at the Festival de Stavelot and at Flagey as part of the Festival de Wallonie.

In 2012 he gave the complete studies of Frédéric CHOPIN at the Midi Concerts at the Academic Hall of the University of Liège, of which he is a regular.
In February 2017 he performed as a soloist with the Philharmonic Orchestra of Ploiesti (Romania) in Grieg’s concerto and in July of the same year he was invited to the Festival “Les Musicales Guillaume Lekeu ”in Verviers (Belgium). He punctuates the year with Tchaikovsky’s 1st concerto in a concert around Russian music where he shares the stage of the Aula Magna in Louvain-la-Neuve with OSEL under the direction of Philippe Gérard.

He was invited in 2019 by the Philharmonic Orchestra of Arad (Romania) to perform in the 3rd Concerto for Piano and Orchestra of L.W. Beethoven.

In 2020 and 2021 he performs with success at the Stavelot festival as part of the Festival de Wallonie 2.0 and at the “Beethoven 250th anniversary” festival at the CRB, concerts broadcast by Musiq3.