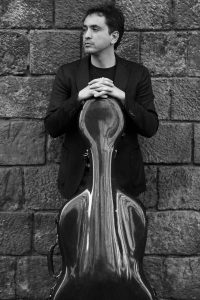 “The wonderful cellist Claudio Pasceri impressed me so much with his musicality and his absolute mastery of his instrument, as well as his competence around the music of today” – Helmut Lachenmann

Among the most beloved Italian cellists of his generation, Claudio Pasceri has an intense musical career.
His orchestral repertoire ranges from Vivaldi’s concertos to Schnittke’s works. He plays with renowned orchestras, including the Toulouse Chamber Orchestra, the Camerata Royal Concertgebouw Orchestra Amsterdam, the Arpeggione Kammerorchester. An interpretation of the Schumann concerto has been recorded by the Bayerische Rundfunk of Munich.
In chamber music, he collaborates with such musicians as Salvatore Accardo, Pavel Gililov, Ilya Grubert, Dora Schwarzberg, Bruno Giuranna, Rohan De Saram, Rocco Filippini and Gilles Apap.
Claudio Pasceri regularly gives masterclasses for many European institutions such as Leopold Mozart Universität Augsburg, Musicalta in Rouffach, Conservatori Superior de Música del Liceu in Barcelona.