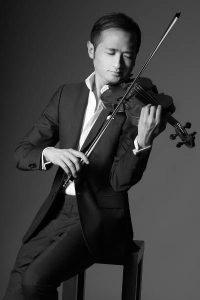 Winner of the 2011 Prix de la Ville de Lausanne, Yuuki Wong has been quoted by The Strad as an artist ‘with imagination and insight….a crowd-pleaser’. Musical studies began at the age of four with the piano and two years later, he started playing the violin. After just three years of violin lessons, he was admitted to the world renowned Yehudi Menuhin School in England, where he studied with Rosemary Furniss and Natasha Boyarsky alongside lessons with Yehudi Menuhin. He was the youngest student at the age of 15 to be admitted to the class of Amita and Roland Vamos at the Oberlin Conservatory, USA. This was followed by studies with Boris Kuschnir at the Vienna Conservatory, Pierre Amoyal at the Haute-Ecole de Musique Lausanne and Ilya Gringolts at the Zürcher Hochschule der Künste. Yuuki has participated in masterclasses with personalities such as Itzhak Perlman, Donald Weilerstein, Joel Smirnoff, Tibor Varga, Aaron Rosand, Zakhar Bron, Frans Helmerson, Viktor Tretyakov, Pamela Frank, Gabor Takacs-Nagy, Miriam Fried, Sylvia Rosenberg, Leon Fleischer to mention a few.

Yuuki has performed at the Menuhin Festival Gstaad as part of the ‘Jeunes Etoiles’ Series, Bellerive Festival in Geneva and has participated in the Verbier Festival Academy, Perlman Music Program, Ravinia Festival. He was invited by Christian Tetzlaff to perform at Carnegie Hall’s Weill Recital Hall as part of the Professional Training Workshop. Recital, concerto and chamber music performances have taken place across 5 continents. Not only is the geographical scope diverse, other highlights include performances for the President of Singapore, for HM Queen Elizabeth II at Buckingham Palace, and with orchestras such as the Helsinki Philharmonic, Finnish Radio Symphony, Orchestre de chambre de Lausanne, Camerata de Lausanne, Auckland Philharmonia, Singapore Symphony, Vienna Mozart Ensemble, Corpus Christi Symphony, Bruno Walter Festival Orchestra.
In Summer 2020, Yuuki Wong played in a livestream for the New York Met at Èze with Roberto Alagna and Aleksandra Kurzak.

Equally passionate about teaching, Yuuki is currently adjoint-artistique for Prof. Sergiu Schwartz at the Haute-Ecole de Musique Lausanne and assisting Prof. Ilya Gringolts at the Zürcher Hochschule der Künste in addition to professor of violin at the Jugendmusikschule in Meilen, Zurich. He organizes masterclasses for violin and piano duos at the Fondation Hindemith Blonay and Château de Giez. Other academies/masterclasses include the pre-festival Chamber Music Week at the Verbier Festival (2014).