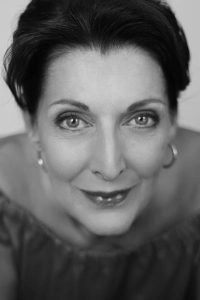 Marie-Thérèse Keller began her vocal studies at Strasbourg National Conservatory where she obtained a first singing prize, a first prize of Lyric Art and a Baroque Chamber Music prize. At the same time, she also study English and German at Strasbourg University. She later joined the School of Paris Opera, where she is a student of Hans Hotter and Denise Dupleix. During this period, she participates in many shows at Paris Opera, also Paris “Opéra Comique”, and in various French and foreign theaters.

Among the many roles of Maria Theresa Keller, mention should be made about Conception (L’Heure Espagnole) she has in particular interpreted in Toulouse (conduct. Michel Plasson) at “Opéra Comique” and at the “Théâtre des Champs Elysées”, Nicklausse (The Tales of Hoffmann), Zerlina (Don Giovanni), Siebel (Gounod’s Faust), the title role of Mignon by Ambroise Thomas, Cherubino (Le Nozze di Figaro), Prince Orlofsky (Die Fledermaus), Dryade (Ariadne auf Naxos) Mallika (Lakmé) with Natalie Dessay, Tisbe (Cenerentola), Dorabella (Cosi fan tutte) and Marie of the Incarnation (Dialogues of the Carmelites). She regularly works with prestigious conductors such as Michel Plasson, Armin Jordan, Marek Janowski, Alain Lombard, Paul Ethuin, or Simon Rattle. She is regularly invited by the Paris Bastille Opera, where she participated in productions Kabanova Katia, The Queen of Spades, Adrienne Lecouvreur, Madame Butterfly and Lucia di Lammermoor.

She has participated in the production of Massenet’s Virgin Festival in Saint Etienne, production gave rise to a record and it was a great success in The Italian Straw Hat by Nino Rota at the Opéra de Nice.

She was invited at the “Théâtre du Châtelet” for the role of Jenufa by Janacek and for the creation of the 60th Parallel composed by Philippe Manoury. She then played the role of Annius in “La Clemenza di Tito” in Rennes and that of Lucretia in Britten’s The Rape of Lucretia at the Grand Théâtre in Tours. She was invited by the Lyon Opera where she performed, among others, the role of Concepcion in “L’Heure Espagnole”. In Nancy, she participated in the world premiere of “Un Tango pour Monsieur Lautrec” from George Zulueta and interprets the role of the cook in “Le Rossignol” by Stravinsky in Rouen Arts Theater.

She sang for the first time and very successfully Charlotte in Werther at the Opéra of Metz, “Geneviève” in “Pelléas et Mélisande” at the Opéra of Rennes and at the “Teatro Comunale” of Ferrara (conduct. Marc Minkowski), Jenufa in Nancy Opera, “Veronique” from Messager at the Opéra in Lausanne, “Juliette or the key of dreams” from Martinu at Paris Opera and the title role of La Belle Hélène at the “Grand Théâtre” in Tours. She performed Verdi’s Requiem at the Paris Mogador Theater and the title role of Carmen at the Baalbek Festival, the Third Lady in The Magic Flute at Marseille Opera, Diane in The Adventures of King Pausole at the “Opéra Comique” and Flora in the Traviata at the Opéra Bastille … In June 2009, she was Madame d’Epinay in Mozart from Reynaldo Hanh at the Spoleto Festival, in the staging of Luigi Pizzi and she participated in recording the Cœur du Moulin from Déodat Séverac, with the Symphonic Orchestra in Tours (cond. J.-Y. Ossonce), which has won several awards, including the french Diapason d’Or.

In 2010 at the Opéra Bastille, Marie-Thérèse Keller sang The Triptych from Puccini (Suor Angelica and Gianni Schicchi), under the conducting of Philippe Jordan, also in “Lulu” and in The Bartered Bride at the Paris “Opéra Garnier” where she also gave a recital for “Young Audience”.

Marie-Thérèse Keller gives numerous recitals of melodies and Lieder. She was the interpreter of the Song of the Earth under the conducting of Cyril Dietrich at Filature Hall in Mulhouse, and the Quercy Saint-Céré Festival.

Marie-Thérèse Keller is a singing teacher at the Ecole Normale de Musique in Paris.

She also taught at the Montbéliard Conservatory (2012-2019). At the same time, Marie-Thérèse Keller taught “The physical work of the singer” and diction at the Opera Studio of the Opéra du Rhin (2007-2018). She participated in a master class at the French Institute in Kyoto in March 2017.

She regularly gives Singing Masterclass in France and abroad.