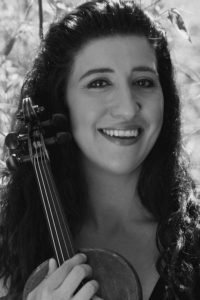 The violinist Maïté LOUIS marks the spirits by her deeply moving interpretations and her extraordinary presence on stage.

Her teachers and masters, from Ivry GITLIS to Nejmi SUCCARI and Jean-Pierre WALLEZ, see her as an immense artist from her very young age, and although a clear way to a classical career opens to her, Maïté chooses to leave the HEM ( Music Highschool )from Geneva at the age of 18. She leaves the beaten track and will enrich her musical personality by other ways.

Maïté LOUIS studied than traditional Irish music and baroque violin (she was co-soloist for the Musicians of the Louvre for several years), and is also interested in gypsy music, tango and jazz, in parallel with intensive work of the classical repertoire.
This peculiarity of her carrier, this refusal to enter the prefabricated mold of classical soloists, this attachment to find the music at the heart of everything, make her the unique and rich artist she is today.

Some orchestras who invited her: Concert Orchestra Column, San Christofer Chamber Orchestra of Vilnius, Chamber Orchestra of the Hautes Alpes, Ensemble Vauban, Symphonia Medica Orchestra, Brass Ensemble in Dumb …
​
Maïté Louis is violin Professor at the Geneva Conservatory (CPMDT) and she is invited to give masterclasses in Belgium and China.
She has written a book on pedagogy “The violin, pleasure to excellence” which was published by Editions Delatour in 2019 and is prefaced by Alexis Galpérine.

Maïté LOUIS plays a violin of Jacobus HORIL (1777 – Roma) and a modern violin from the master luthier Pierre Caudal.