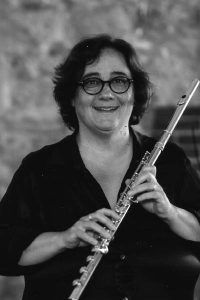 Emmanuelle Réville began studying the flute at the age of 10 at Strasbourg National Conservatory CRR. Five years later, she won a gold medal unanimously. At the age of 17, she entered the National Conservatory of Music and Dance in Paris (CNSMD), in the class of Michel Debost. She obtained a first prize for flute at the CNSMD in Paris and then decided to enter the writing class (harmony and counterpoint) of this CNSMDP.

In 1988, she won third prize at the International Flute Competition in San Diego, United States.

In 1990, she was appointed solo flute at the Orchester national de Lyon.

A member of the Sfogato Trio (flute, viola and harp) for many years, she also leads a career as a soloist, performing in particular under the direction of conductors such as Michael Stern, Matthias Bamert, Karl Anton Rickenbacher, Jean-Jacques Kantorow, Alain Lombard and Emmanuel Krivine.

Since October 2001, Emmanuelle Réville has been teaching flute at the CNSMD – National Conservatory of Music and Dance in Lyon.