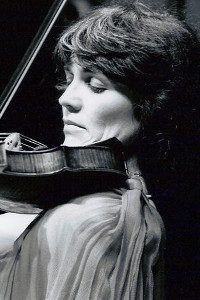 Between 17 and 23 years old, she became one of the youngest and the most prestigious laureate of major international competitions :
​Grand Prix Long-Thibaud (1973)
Henryk Szerynk Award (1973)
Tchaikovsky Award (1974)
Concours Reine Elisabeth in Belgium (1976)
Prix International in Montreal (1979)

Noticed very early by David Oïstrakh, she studied, on his advice, in Moscow Tchaïkovski Conservatory in 1975-76 with Boris Bielinki.

With a PhD (honorary doctorate), she was also Franco Gulli’s assistant at Indiana University (1977-78, Bloomington – USA). She was offered a position at Los Angeles University where Jascha Heifetz taught, but she declined the offer, taking advice from the great cellist Janos Starker who told her to pursue her career as a concertist.

His words to her were: “Marie-Annick Nicolas? One of the world’s greatest violinist…”

​Between 1980 and 1986, she has held the position of First Concertmaster of the Orchestre Philharmonique de Radio-France (Paris).

​Her very early rise with international celebrity have brought her to perform on world’s greatest stages, in more than 25 countries: United States, Russia, Belgium, Canada, Spain, Portugal, Italy, Switzerland, Germany, Greece, Israel, Netherlands, United Kingdom, Canary Islands, Cyprus… Welcomed and applauded in recital or as a soloist, unanimously greeted by the press, the audience and the Record Critic.

​Professor at the prestigious « Haute École de Musique » of Geneva since 1993, she has been dividing her time between teaching and performing on international stages.

​On the 31st of Mars 2013, she was decorated with the awards of « Chevalier de l’Ordre National de la Légion d’Honneur ».

​To greet this amazing artist, the astronomer J.C. Merlin, the International Astronautical Federation and the NASA, have paid tribute to her by giving her name to a planet of our solar system. So, somewhere in the universe, the name Marie -Annick Nicolas is registered for eternity …

​Marie-Annick Nicolas is referenced in « Le dictionnaire des Interprètes » by Alain Pâris, in the famous book of Samuel Applebaum,

​The Way they play, in the bibliographical book livre Christian Ferras by Thierry de Choudens and on the one devoted to Zino Francescatti by Charles de Couëssin and Gaëtane Prouvost.