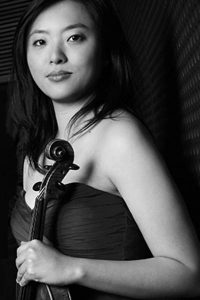 A passionate chamber musician, Ying has collaborated with artists of international acclaim including Donald Weilerstein, András Schiff, Pamela Frank, Kim Kashkashian, and Gidon Kremer among many others. She has been engaged by the Kronberg Chamber Music, Caramoor, Ravinia and Yellow Barn Music festivals, as well as the Winter Chamber Festival in Israel.

Born in Urumqi, China, Ying began her violin studies at age four. When she was eighteen, Ying moved to Boston where she received B.M. and M.M. degrees under the tutelage of Donald Weilerstein and Miriam Fried as the recipient of the Irene M. Stare Presidential Scholarship at the New England Conservatory, and served as the teaching assistant of Donald Weilerstein. In 2012 Ying moved to Germany to continue her musical studies with Heime Müller at the Musikhochschule Lübeck, but returned to Boston in 2013 to join the Parker Quartet. Since 2014, they have been Blodgett Artists-in-Residence at Harvard University’s Department of Music, and also in residence at USC School of Music.

Ying Xue is teaching violin and chamber music at Harvard University in Boston.