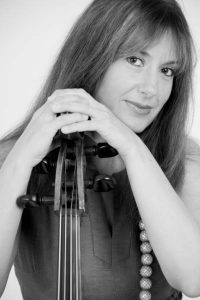 Vélitchka Yotcheva is one of the most talented French-Canadian cellists of her generation. She has a distinguished career as a soloist, chamber musician and teacher. During her studies, she inherited the best traditions of the Russian cello school represented by M. Rostropovitch and S. Kozolupov.
Born in Stara Zagora, Bulgaria, Vélitchka Yotcheva began her studies at the age of five with Professor Tacho Tachev. At 18, she left for Moscow at the Tchaikovsky Conservatory, where she worked for five years in the class of Marina Tchaikovskaya (former pupil and assistant of Mr. Rostropovich) and later under the direction of Professor Valentin Feigin. In the string quartet class, she studies with Alexandre Korchagin (cellist of the Shostakovich Quartet). In 1992, she graduated from the Tchaikovsky Conservatory of Moscow with a Master of Arts degree.
Vélitchka Yotcheva emigrated to Canada in 1995 and obtained her PhD in 2000 at the Université de Montréal, under the direction of Yuli Turovsky. Two-time winner of national competitions in Bulgaria, she won the 1996 International Competition of the Orford Arts Center (Canada).
Vélitchka Yotcheva gave several concerts in Russia, Bulgaria, France, Canada and the United States.

Her first album was released in February 2004 , made with the Montreal Rachmaninov Trio, under ATMAclassique (Canada) label. A second disc has been released in April 2005, under the label Disques XXI-21 (Canada), and contains virtuosic pieces for cello and piano. In the spring of 2005, Vélitchka Yotcheva recorded the complete J. S. Bach Suites, still on Disks XXI-21. This double album, was released in December 2005. To mark this event, Vélitchka Yotcheva performed in concert Bach’s Six Suites on December 11, 2005 at the Chapel of Good Shepherd in Montreal. In April 2008, a CD devoted to the cello and piano sonatas of C. Franck and J. Brahms was released and in early 2010, the complete trio of Rachmaninov with violinist Jean Sébastien Roy and pianist Patrice Laré.

In 2008 Vélitchka Yotcheva created the I Cellisti Orchestra, a set of twelve cellos. The orchestra performs successfully throughout North America and makes its debut album in 2012.

“The piano is fair and sensitive, the cello soft and graceful” Christophe Danzin, The World of Music, France – May 2004

“Trained at the Russian school, her playing reminds us of Pablo Casals and the cathedral type sound, Tortelier way. An expressive game marked by a lot of breath, a certain tension that is not unpleasant and above all, a beautiful recording that makes us imagine the artist at work. An inspired gift. “
Christophe Rodriguez, The Journal of Montreal – December 2005

“Vélitchka Yotcheva seduced by a great coherence and a poetic approach” Christophe Rodriguez, The Journal of Montreal – March 2008