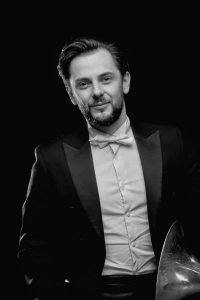 After studying violin and singing at the Paris Maîtrise, Tristan Aragau began the horn at the age of twelve with Paul Minck (solo horn at the Radio France Philharmonic Orchestra).
At the age of seventeen, he won first prize in chamber music in the city of Paris (class of Dominique Féret) and entered at the National Conservatory of Music and Dance of Paris in the class of André Cazalet.
As part of his training, he joined Michel Garcin-Marrou class of natural horn (classical and baroque) as well as the chamber music classes of David Walter and Jens Mcmanama.

In 2004, at the age of twenty-one, he obtained the diploma of higher education (DFS) from the National Conservatory of Music and Dance of Paris with a first prize of horn with honors unanimously.
In 2005, Tristan Aragau was appointed co-soloist of the Île-de-France National Orchestra.

From then on, he is invited to play as a soloist in various orchestral formations including the Opéra National de Paris, the Orchester de Paris, the Orchester de chambre de Paris, the National “Orchestre de France” and the Radio France Philharmonic Orchestra. He plays under the direction of internationally renowned conductors including Pierre Boulez, Myung-whun Chung, Christoph Eschenbach, Mikko Franck, Paavo Järvi, Philippe Jordan, Emmanuel Krivine, Kurt Masur, Michel Plasson and Georges Prêtre.

Since 2006, Tristan Aragau is professor of horn at the conservatories Hector Berlioz and Maurice Ravel of the Xth and XIIIth arrondissements of the city of Paris and at the regional conservatory of Saint-Maur-des-Fossés.