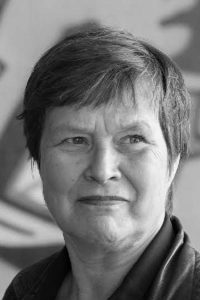 After a first viola prize at the CNSMD – Superior Conservatory – in Paris in Serge Collot’s class and a first prize for chamber music in Pierre et Nelly Pasquier’s class, Sylvie Altenburger became soloist of the Pierre Boulez “Ensemble Intercontemporain” from 1980 to 1983.

In 1981, together with Chrichan Larson and Anna Lindal, she founded the Trio Des Lyres, a string trio dedicated to contemporary music and also dedicated to the interpretation of classical repertoire on instruments of the time.
Then in 1992 with Irmgard Zavelberg, Tinta Schmidt von Altenstadt and Ulrike Zavelberg. She founded the Rubin Quartet, a quartet awarded in 1996 in Evian for Mozart’s best performance.
Sylvie Altenburger is a member of the “Ensemble Aventure”, an ensemble dedicated to contemporary music.

Sylvie Altenburger has been teaching viola and chamber music at the Musikhochschule Freiburg since 2002.