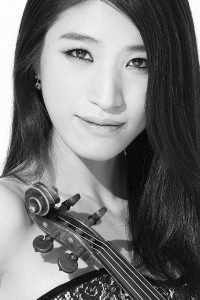 SeYoung Maria Kim is a Korean-born violinist, who has been characterized as an artist who “not only infuses her music with strength and vitality; she herself becomes music.“ and who “will certainly cause a sensation in the world of music.“

She studied violin with several major Korean violin professors, including Han-Won Choi and Nam-Yun Kim. Graduated from YonSei university in 2001, she went on to study at Basel with Prof. Adelina Oprean in her “Konzertklasse”. In 2004, she graduated with highest marks from the Studiengang “Künstlerische Ausbildung” with Prof. Wolfram Konig in Trossingen. She then went on to study in the “Solistische Ausbildung“ with Prof. Winfried Rademacher as well as for baroque violin with Prof. Anton Steck and conducting chorus / orchestra with Prof. Manfred Schreier. During this time, she was fortunate to work with professors covering a wide range of instruments in chamber music such as Peter Barcaba(Piano), Anton Spiri (Piano), Diethelm Jonas (Oboe), Jean-Guihen Queyras (Cello), Chen Halevi (Clarinet), Akos Hernadi (Piano), Francis Orval (Horn), Wolfgang Wagenhauser (Piano), Sadao Harada (Cello, Tokyo Quartet). She also took master classes with Se-Won Seo, Ik-Whan Bae, David Zafer, Roman Nodel, and Bart van Oort.

SeYoung Maria Kim played as orchestra concertmaster at the “Musikalischer Sommer” for the “Friedensfestival Ostfriesland“ Festival, played as 1st violin in the Philharmonische Staatsorchester Mainz, as principal player in the Oldenburgische Staatsorchester and concertmaster in the Anyang Philharmonie. Furthermore, she has played as a soloist in the Seoul Symphony Orchestra, the Yon-Sei String Orchestra, the “Orchester des musikalischen Sommers” in Ostfriesland, the Kammerorchester Radolfzell, the Premier Orchestra in Seoul, String Orchestra Erbach as well as a soloist and chamber musician in several major music festivals including the Aspen Music Festival in Colorado (USA), the “Zomerconcerten” in Drenthe (Holland), and the “Musikalischer Sommer Ostfriesland” (Germany).

Kim has participated in a Deutsche Grammophon’s CD production and a CD recording with world-renowned musician Vladimir Ashkenazy, as well as played live in German radio broadcasts (Deutschlandradio Kultur, SWR). Her work in bridging and integrating classical music from different epochs culminated in a solo recording album “Violin Pure” that has been described as “a remarkable balancing act” in which “she contrasts two milestones of the baroque solo repertoire with two mainstays of romantic and contemporary violin music […] Kim manages to give each piece its proper voice, including its stylistic expression. In her play she integrates two features that have always characterized true artists: technical virtuosity combined with deference and respect for the work of art.”

Currently, she works as a soloist, as member of the chamber music ensembles Crossingen and Ensemble UI, and as member of the Duo Clara (with piano), the Duo Alouette (with guitar), and the CM Trio (piano and cello).

In addition, along with her passion for not only performing but also for teaching music she is General Director of the Bucheon Youth Orchestra and professor for violin at one of the top music education departments in Korea at Ewha University.

SeYoung Maria Kim’s teaching is focused on enabling students to realize their full musical potential so they can succeed in their career. This includes addressing technical issues such as posture and bowing technique, but also preparation for exams and recitals, as well as deepening a student’s musical understanding.