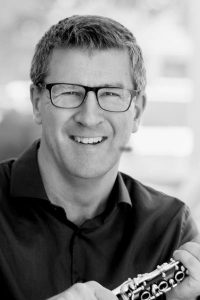 Additionally to his 33 years career in the orchestra, he holds a good reputation as a soloist. This features such renowned conductors as Adam Fischer, Claus Peter Flor, Fabio Luisi (the past Principal Conductor of the VSO), Johannes Wildner, Miguel Á. Gómez Martínez, Oleg Caetani, Rafael Frühbeck de Burgos, Bertrand de Billy, Yakov Kreizberg and Georges Prêtre. In 2019 he has played recitals in New York and Washington.

Besides this, Reinhard Wieser plays chamber music with the Wiener Kammermusiker, the Johann Strauss Ensemble of the Vienna Symphony Orchestra and other renowned artists, such as Renaud Capuçon and Philippe Jordan, the current chief conductor of the VSO. Various projects have included colleagues like Rainer Honeck, Thomas Christian, Maria Prinz, Jasminka Stancul and Christopher Hinterhuber.

Additionally to many recordings with the Vienna Symphony Orchestra he has recorded Theme and Variations for Clarinet and Strings by Jean Francaix for Camerata Tokyo. Recently added was also a CD with the Concertino for Violin and Clarinet by Vítězslava Kaprálová.

Since 1996, Reinhard Wieser heads his studio in the Music and Arts University of the City of Vienna (MUK). His former students play in major orchestras in Europe and are teaching in many countries. He has hosted numerous master classes in Austria, Germany, Spain (Valencia, Santiago de Compostela), Malta, Venezuela, Japan and the USA (Bloomington Jacobs School of Music, Michigan State University).