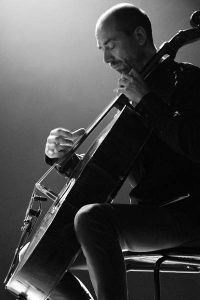 His orchestral practice led him to join the European Union Youth Orchestra of which he was a member for two years, playing under the direction of Bernard Haitink, Mstislav Rostropovich, Vladimir Ashkenazy or even Carlo-Maria Giulini. He then joined the National Orchestra of Pays de la Loire, and at the same time continued his training as a quartetist as part of the Pro Quartet development cycle within the Alkan Quartet, benefiting in particular from a residency at the Britten Piers School with members of the Amadeus Quartet.

Pascal Jemain has been a member of the Arta Balarta Quartet for several years, with which he explores the vast repertoire for quartet as well as the world of tango.

He is also a professor at the National Conservatory in Saint-Etienne.