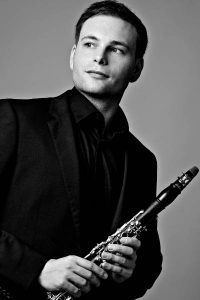 A consummate performer and scholar, Nicolai Pfeffer is hailed by the press for his personal blend of fluid technique, his colorful tone,and unique musical voice. Even as a student this young musician was described by the legendary Viennese clarinetist Alfred Prinz as “an excellent clarinetist and a sensitive musician—one who plays with both technical command of the instrument and captivating musicality.”

Born in 1985 in the city of Fulda, Germany, Mr.Pfeffer began his formative studies under the guidance of the German-American clarinetist Bruce Edwards. He also captured the attention of the world-renowned Bamberg German clarinet makers Werner Schwenk and Jochen Seggelke, who have supported his career and to whose instruments he remains faithful today. Mr. Pfeffer studied under Professor Ralph Manno at the Hochschule für Musik und Tanz in Cologne, from which he holds both a Bachelor of Music in Clarinet and a Master of Music in Solo and Chamber Performance“with Honours”. He completed his postgraduate studies under Professor Howard Klug at Indiana University Bloomington in Indiana (USA). During his studies, Mr. Pfeffer drew great inspiration from his masterclass experiences with Sabine Meyer (Lübeck), Sharon Kam (Hannover), Anthony Spiri (Cologne), Karl Leister (Berlin), Alfred Prinz (Vienna), and Sir Alan Hacker (London).

Mr. Pfeffer is the recipient of many prizes, scholarships and grants, including awards from the Oscar and Vera Ritter Foundation, the Xiao Yi Association, the Horst and Gretl Will Foundation, and the International Richard Wagner Scholarship Foundation. His orchestral experience includes tenures with the Cologne Opera, the Frankfurt Radio Symphony Orchestra and the Bamberg Symphony. He has performed in major concert halls in Germany including Munich’s prestigious Herkulessaal, the Berlin Philharmonie, the Leipzig Gewandhaus and the Cologne Philharmonie, and at many high-profile festivals in Europe, the United States, South America and the Middle East. He is also a passionate soloist and chamber musician, and for many years has performed extensively with the pianist Felix Wahl. Mr. Pfeffer made his solo debut with Milan’s La Scala Orchestra under Maestro Fabio Luisi in the summer of 2018

Mr. Pfeffer engages in frequent collaboration with other musicians and ensembles, including pianists Cathy Krier, Michail Lifits, Mariya Kim, Michel Dalberto, Simone di Crescenzo, James Maddox, Paul Cibis, violinists Ida Bieler, Yury Revich, Niklas Liepe, and cellists Leonid Gorokhov and Benedict Klöckner, as well as vocalists Ingeborg Danz and Maria Aleida, the Ensemble Clarinesque, the Alinde and Asasello String Quartet, and the Chamber Soloists of Detroit. Mr. Pfeffer enjoys a broad repertoire and is increasingly committed to the performance and emergence of new music by such composers as Dirk-Michael Kirsch, Greg Bartholomew, and Michael Ostrzyga. In 2019 Mr. Pfeffer will perform the premiere of a concerto for clarinet and large orchestra written for him by the Berlin-based Israeli composer Gilad Hochmann. The 2017/18 season saw the premieres ofMr. Pfeffer’s orchestrations of Italian opera fantasies, some of which are nowpublished by Breitkopf & Härtel. In 2019 he will present a new Belcanto-inspired program with the Italian pianist and scholar Simone di Crescenzo.

Nicolai Pfeffer’s debut recordings include works by Robert Schumann, Max Reger and Alban Berg, as well as his most recent and highly-acclaimed recording of the two Clarinet Sonatas of Op. 120 by Johannes Brahms (CAvI Music) which since its release has received unanimous praise from music critics throughout Europe: “In woodwind heaven—pure Brahms” (Der Spiegel), “The interpretation of the duo Nicolai Pfeffer and Felix Wahl radiates with the finest poetry” (German Clarinet Association), “Wahl and Pfeffer give these special pieces a moving humility. Like an intense and captivating dialogue, the subtle interplay of these two musicians conjures a complex portrait of the mature composer” (Crescendo).

The same passion and expertise that drives Mr. Pfeffer’s performances also inspires his musicological research and teaching activities.
He is a highly-sought instructor at the Grünwald School of Music in Munich, and serves on the clarinet faculties of the prestigious Cologne Hochschule für Musik, the Pre-CollegeCologne, the Hanover für Musik, Tanz und Medien, the Bremen Hochschule für Künste, and Lars Vogt’s ECHO-prize-winning “Rhapsody in School”. He has given masterclasses and lectures at universities and conservatories in Cologne, Frankfurt, Michigan, and many others.

Nicolai Pfeffer is highly involved in the development of new scholarly editions for clarinet chamber music and solo literature. The fruits of these labours are manifested in critical editions published by G. Henle Verlag, Breitkopf& Härtel, Bärenreiter, and Edition Peters, which have collectively received high praise from experts for their exemplary textual criticism. Specially crafted arrangements were made for prominent colleagues Ralph Manno, Anette Maiburg, the Signum Saxophone Quartet, Jonas Kaufmann, Guido Schiefen, Sabine Meyer, and many others. Mr. Pfeffer is also a frequent contributor to the international trade journals “The Clarinet,” “Rohrblatt,” and “Clarinet Didactics”, a pedagogy project of the Lucerne School of Music, Switzerland.

Rounding off his wide-ranging activities are masterclasses for the Baremboim-Said Foundation and radio and television broadcasts for Germany’s public broadcaster ARD, Westdeutscher Rundfunk, and Hessischer Rundfunk. Nicolai Pfeffer is a proud Silverstein and Schwenk & Seggelke performing artist.