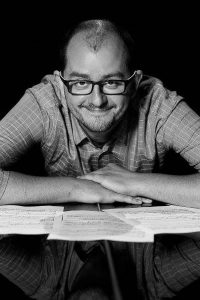 Francuz is one of the most eminent artists of his generation, performing successfully in North America, Africa , Asia and throughout Europe.
He gained recognition from listeners and music critics and he is regarded as one of the most interesting Polish pianists. His musical technique is very impressive and his interpretations of compositions are distinguished by sound imagination, power of expression, they are full of life.

He was born in 1980 in Szczecin. He is a graduate of Feliks Nowowiejski State Musical High School in Szczecin, in Mikolaj Szczesny’s piano class.
He also graduates in Ignacy Jan Paderewski Musical Academy in Poznan, where he studied under the direction of an eminent teacher, professor Waldemar Andrzejewski.

Michal Francuz is professor at the Ignacy Jan Paderewski Musical Academy in Poznan he actively participates in academic concert activity.

He frequently gives concerts both as a solo and chamber musician, gaining recognition of listeners and critics. He made his debut as a soloist with an orchestra at the age of 10 and has cooperated since then with orchestras in Poland and abroad.

He has been regularly invited to take part in music festivals, among others, International Festival of Modern Music Poznań Music Spring, Autumn, International Festival Chopin in Autumn Color in Antonin. He has been invited to take part in prestigious music events.
He inaugurated the International Chopin Piano Competition in Antonin with his piano recital. Michal Francuz gave many piano recitals at Chopin’s Birth place Museum in Zelazowa Wola (Poland) and Royal Łazienki in Warsaw. He performed during Cinquième Festival Culturel International de Musique Symphonique in Algeria, Sunrise in Asia (Vietnam, India), Lubomirski Festival, Bergen Festival and many others.
In October 2016, he was an official pianist of 15th Henryk Wieniawski International Violin Competition in Poznan.