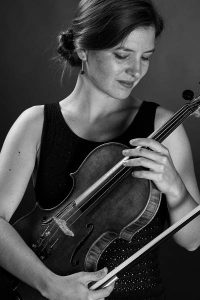 Marie graduated from the Paris National Conservatory – CRR de Paris, where in 2008 she obtained an viola Diploma. She then improved at the Paris-Boulogne-Billancourt Superior pole – Pôle Supérieur (Michel Michalakakos viola class), before entering at the Lyon Superior Conservatory – CNSMD in Lyon (Jean-Philippe Vasseur class), where she obtained her Master of Interpreting in 2014. She also benefits from advice from Gérard Caussé, Hartmut Rohde and Garth Knox, on the occasion of various masters classes. She was supported by Société Générale Musical Patronage and selected to participate in Orford International Music Academy in Canada where she perfected her skills with Jutta Puchhammer during the summer of 2014.

Member of the European Union Youth Orchestra during her studies, she participated in several tours in Europe and the United States (Konzerthaus Berlin, Concertgebouw Amsterdam, Carnegie Hall, New York), edited by Vladimir Ashkenazy. She there accompanies great soloists such as Itzhak Perlman and Pinchas Zukerman.

Passionate about teaching to an ever growing large audience, Marie has held the viola french teaching diploma since 2016. She is professor at the National Conservatory – CRR of Aubervilliers-la Courneuve.