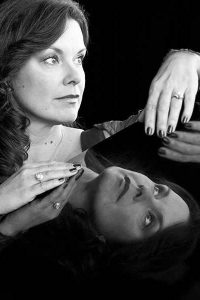 The Swedish-born soprano Malin Hartelius studied in Vienna and began her career as a member of the ensemble of the Vienna State Opera.

From 1991 to 2012 she was permanently engaged at the Zurich Opera House, where she was able to build up a broad repertoire, including roles such as Adina in Donizetti’s “ELISIR D`AMORE”, Leïla in Bizet’s “LES PÊCHEURS DE PERLES”, Tatjana in Tschaikovski’s “EUGEN ONEGIN “As well as the most important Mozart roles in their field, among others Pamina in THE MAGIC FLUTE, Konstanze in THE ABDUCTION FROM THE SERAIL, Countess Almaviva in LE NOZZE DI FIGARO, Donna Elvira in DON GIOVANNI.

Guest performances have taken her to the festivals in Aix-en-Provence and Salzburg.

She has performed at numerous European opera houses, including Frankfurt, Berlin, Paris, Munich, Stockholm and Vienna.

The love of chamber music has a central place in Malin Hartelius’ artistic work and she appears regularly with the Gringolts Quartet, among others.

In addition to her work as a singer, she is a lecturer in singing at the University of the Arts in Bern and regularly gives master classes.

The artist’s work is also documented through numerous recordings on CD and DVD.

In January 2010, Malin Hartelius was awarded the Order for Science and Art “Litteris et Artibus” by the Swedish King in Stockholm.