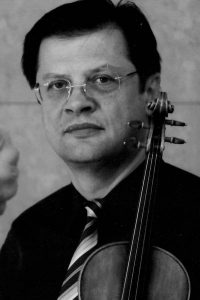 Liviu Casleanu is a disciple of legendary St. Gheorghiu at the National University of Music Bucharest, who was a pupil of D. Oistrakh.

As a highly praised violin virtuoso, concertmaster and pedagogue, L. Casleanu has won many prizes in international competitions e.g. “T. Varga”, Concours de Geneve, Colmar String Quartet Competition.
He documented his mastery on the violin through numerous recordings for radio and television (RAI, Swiss Radio, WDR Cologne, Brazilian Television, among others). Recordings with Ludwig Quartett including complete works of J.C. de Arriaga for the American Company “Musical Heritage”-Patchwork under the label Elysium Records were followed by enthusiastic critics.