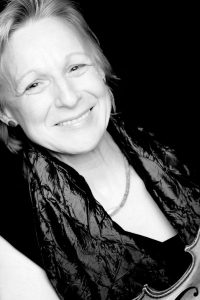 Born into a family of musicians, she started to play the violin at the age of 6 years. She studied with Max Rostal and Sandor Végh.

In 1974 she was Co-founder of the “Junge Deutsche Philharmonie” which she was leading for 4 years and which won the First Prize at the Herbert-von Karajan-Competition.

Then, she has been concertmaster and soloist of various orchestras such as Klassische Philharmonie Bonn, Deutsche Kammerakademie and Kammerphilharmonie Bremen.
For a short time she was also a member of the KRSO, Kölner Rundfunksinfonieorchester.
With these orchestras she toured all of Europe, Asia, USA and Canada.
She also played regularly with the Ensemble Modern, an ensemble specialized in Contemporary Music.

In 1990 she started research in historical performance practice which led to the formation of her own orchestra “Concerto con Anima” playing on original instruments and the string quartet “Pleyel Quartett Köln” which is playing on gut strings. The quartet released 10 CDs so far, one of which was rewarded by the “German Record Critics Prize”.

Next to her love to play chamber music, her big passion is teaching and helping other musicians with her vast experience in all genres of music.

Since 1990, Ingeborg Scheerer has been training the violins of the Bundesjugendorchester, the symphony orchestra of the most talented young people of Germany.
Since 1998 she has been professor for violin and chamber music at the Musikhochschule Köln.

www.concertoconanima.de
www.pleyelquartett.de
Official website of Ingeborg Scheerer
We use cookies to ensure that we give you the best experience on our website. If you continue to use this site, we will assume that you are happy with it.I agreePrivacy policy