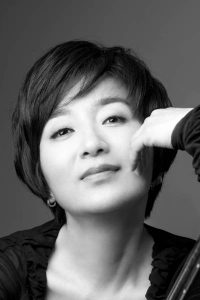 Hye-Seung Keum was born in Kyungbuk, South Korea where she started her first piano lesson at the age of 4. She studied music at the prestigious Yewon Arts Middle School with Prof. Inha Han and Seoul Music & Arts High School and graduated Seoul National University (BA) with honor under the guidance of Prof. Nakho Paek. She pursued her further studies with Prof. Naoyuki Taneda and Prof. Wolfgang Manz at the Kalsruhe Staatliche Musik Hochschule in Germany for her Kuensterliche Ausbildung and Konzertexamen degrees majoring in piano performance. She has got musical influence through the masterclasses held by renowned professors such as Jurgen Uhde, Sergei Dorenski, Helena Costa, Takahiro Sonoda, Detlef Kraus, Kahl-Heinz Kammerling, Lisa Pojola, Martha Sosinskaya and Rudolf Kehrer.

At the age of 11, she won the Grand Prix at the National Youth Music Competition and made her debut in playing Piano Concerto with the Korean Christian Symphony Orchestra in Seoul. She also won numerous first prizes at national competitions and received the Chungnam Music Award.

She used to be an Artist-in-Residence at Stevens Institute of Technology in USA from July 2008 to June 2009. She is a steering member of Piano Society of Korea, Korean Association of Piano Pedagogy and Korean Dalcroze Association. As a professor of Piano at the Baek-Seok University in Korea, she devotes herself to educate the students and recently has got the best professor award for her academic achievement.