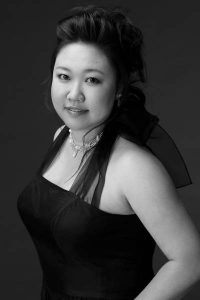 She performed in Germany at the “Kasseler Musiktage”, in the Steingraeber-Haus in Bayreuth, in the Bruchsal Castle by Kiwanis Club, in Steinway Haus in Munich and at the “Racconigi Festival” in Italy. She has played with the Nürnberger Symphoniker. She was elected as a recital series by the Japan Performing Federation in Opera City and Cultural Agency sponsored . In Salzburg she performed in the prizewinner concert as part of the Salzburg Festival in the Great Hall of the Mozarteum Foundation. She is responsible for the first release of a music of Markus Lehmann-Horn and the corresponding CD.

She lectured at Tokyo College of Music High School in 2015.
Since 2015 she is jury member of the competition “Jugend Musiziert”.
Since 2012 she is teaching piano at Hochschule für Musik in Würzburg – Germany.