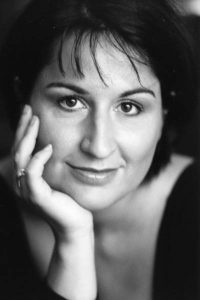 Gundula Schneider received her vocal training at the conservatories in Dresden and Karlsruhe with Margret Trappe-Wiel and Maria Venuti. Significant for the further artistic development of the singer were studying in the song class of Mitsuko Shirai and Hartmut Höll and master classes with Brigitte Fassbaender, Hilde Zadek and Elisabeth Schwarzkopf. Gundula Schneider is a laureate of several international competitions, i.a. “Pro musicis” New York / Paris, “Brahms Competition” Hamburg, International Singing Competition in Karlovy Vary. She is a finalist of the Young Concert Artists Competition and a scholarship holder of the German Music Council and the Richard Wagner Association.

From 1997 to 2001 she was a permanent member of the Theater Dortmund, where she was ao in the title role of the opera “Carmen” by Bizet, as a composer in Richard Strauss’s “Ariadne auf Naxos”, as Hansel in Humperdinck’s “Hänsel und Gretel” and as Dido in Purcell’s “Dido and Aeneas”. Guest engagements have since been conducted by the freelance artist u.a. to the opera houses in Santiago de Chile, Strasbourg, Naples, Innsbruck, Komische Oper Berlin, Stuttgart, Dusseldorf, Cologne, Karlsruhe, Kassel, Nuremberg and Mannheim, where they are among others. in the parts Venus in “Tannhäuser”, Preziosilla in “La forza del destino”, composer in “Ariadne auf Naxos”, Carmen in the opera of the same name, Adalgisa in “Norma”, Sesto in “La clemenza di Tito” and Waltraute and 2 .Norn in “The Ring of the Nibelung” was experiencing.

From 2011 to 2016, Gundula Schneider taught singing at the Hamburg University of Music and Drama as a part-time professor. In April 2016, she was appointed vocal professor at the HMDK Stuttgart.

A special love connects Gundula Schneider with the song. As a song and concert singer she can be heard in Germany, Europe, Japan, China and the USA. In addition, she has participated in several radio broadcasts for various broadcasters such as the SWR, HR, MDR and RAI UNO and in various CD recordings.