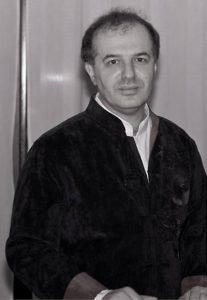 Franco-Italian pianist born in Venice into a family of musicians, Gabriel Gorog initiated his musical course in his hometown with the pianists Luisa Baccara and Gino Gorini and in 1982 he won the First Prize of the Conservatory of his hometown. He then continued his studies at the Ecole Normale de Musique in Paris in the class of André Gorog where he obtained, unanimously and with the congratulations of the jury, the Superior Licenses of Concert and Teaching as well as the Superior Diploma of Chamber Music.

Gabriel Gorog performs as a soloist, chamber music (with Alain Meunier, Gérard Caussé, Federico Agostini, Raphaël Pidoux, David Grimal, Sara Mingardo, Yves Henry …) and with orchestra, in Europe (France, Italy, Belgium, -Bas, Hungary, Greece, Germany, Russia, Turkey) as well as in the USA and Ivory Coast, Brazil and Chile.
Notably, he has performed in the “Great Pianists” cycle of the Municipal Theater of Santiago, at the Liszt Academy and the Vigado Hall in Budapest, in the concert season of the La Fenice theater in Venice and in 1999, made very noticed debuts in the festival of the Great Lent of Saint-Petersburg.

In France, he participated in many musical events such as Les Rencontres Internationales de Piano de Saint-Jean de-Luz, the Bergerac festival, the Impromptus en Berry, the Moulin d’Andé, the Piano festival in Riom, the festival “Musiques au Pays de Pierre Loti” (with actress Marie-Christine Barrault) and has performed for the Cziffra and Sophia-Antipolis Foundations.
He regularly participates in TV and radio broadcasts (France, Italy, Belgium, Brazil, Hungary, Turkey, Ivory Coast).
His repertoire extends from Bach to the present day with a predilection for rare works (Russian composers, the complete works for solo piano by Serge Rachmaninoff …). Currently, he plays the complete Beethoven sonatas (piano, piano and violin).

His recordings include the complete Préludes op.38 and the 3rd Sonata op.46 by Dimitri Kabalevski (Dynamic), the complete Préludes by Félix Blumenfeld (Suoni e Colori) and that of the works for piano and cello by Anton Rubinstein with cellist Alain Meunier (Dynamic).
He has also recorded the two elegies by F. Listz and the two sonatas by J. Brahms for piano and cello with Alain Meunier (Suoni e Colori) and finally the Davidsbündlertänze by Schumann, the Hungarian Dances by Brahms and the Romanian Dances by Bartok for the Gestor house (Hungary).

In addition to his concert career, Gabriel GOROG leads an educational activity with master classes (piano and chamber music) in France and abroad (Brazil, Russia, Italy, Ivory Coast). He is currently full professor of piano at the Conservatoire G. Bizet (Le Vésinet). He is also regularly called upon as a member of the jury of conservatories, national and international competitions.