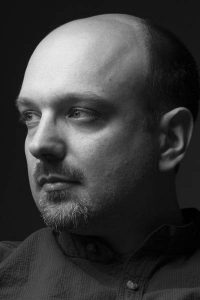 Eric Maestri (1980) is an Italian composer currently living and working in France. Even so, in musical terms, he has no belief in the existence of borders. Eric writes instrumental, vocal, electroacoustic, mixed-media, and collective works; his publisher since 2011 is Suvini Zerboni (Italy).

The first work in his catalogue that he recognizes is La musica che non ho in mente [The music that I don’t have in my mind] (2001), a musical-theatre composition that sums up all the themes that his subsequent music would develop, at the frontiers of philosophical reflection on music itself; psychological self-analysis of the creative phenomenon; and the flow of time which, throughout its experience, projects images (phantoms) into the dimension of the future. In this work, the theme of writing constitutes the central component, interpreted as a unique concrete and conceptual aspect of the act of composing: writing is thought of as Derrida could conceive of it, as archi-writing. This perspective invites Eric to imagine composition as a complex act illuminating the natural and psychological phenomenon of becoming. The composer would ensue this path in works over the following decade or more: Pieghe; Celestrografia; Visioni – a show for electronics, lights and ensemble, premièred at the Venice Biennale in 2013; Le Cose; La musica è uno specchio trasparente; Ancora ancora la notte. Eric Maestri is a co-founder of /nu/thing, a composer’s collective whose activities are documented in the blog www.nuthing.eu and the members of which have composed collective works.

Eric Maestri was trained at the conservatories of Brescia and Turin, where he obtained his “diploma di maestro di musica” in composition. He then specialized at the Strasbourg Conservatory and at IRCAM. He also holds a PhD in composition from the University of Huddersfield (UK). His teachers include Gilberto Bosco, Ivan Fedele and Yan Maresz. He was a nominee for the Gaudeamus Music Prize 2008 (Amsterdam). During his training he participated in the IRCAM reading panel (2009–10), Acanthes Academy (2007–08), the Darmstadt summer courses (2010), and the Fondation Royaumont–Voix Nouvelles (2012). He received the Fondazione de Sono Scholarship (2011–13). On a musicological level, Eric is interested in the history and analysis of electroacoustic and mixed-media music. He teaches at Paris 8 University, Vincennes-Saint-Denis where he is member of CICM lab. Eric has previously taught at the University of Strasbourg, Strasbourg Conservatory.