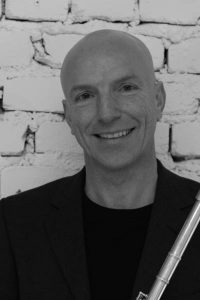 As longstanding Solo Flutist with renowned orchestras, chamber musician and university lecturer Dirk Peppel is among the most distinguished flutists of his generation.
He graduated from the Hochsch’en Conservatory in his hometown of Frankfurt am Main, he studied with Matthias Rütters in Essen as well as with Jean-Pierre Rampal and Maxence Larrieux.
From 1987 until 2013, he was Solo Flutist at the Baden State Orchestra in Karlsruhe. More than 40 orchestras have since engaged him as a guest. Numerous broadcasting and CD productions are proof of his wide ranging repertoire.

His concert trips not only take him into many European countries but also to North and South America, China, Japan and Israel.