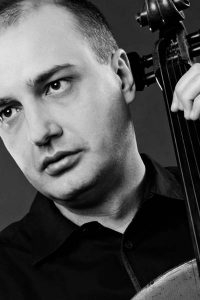 Denis Severin is a winner of Echo Klassik Prize (2015) and Grammy Awards (2007), and a laureate of several international competitions in Greece, Italy and Spain.

He is also president of an international charitable organization Art Without Borders and an organizing committee member of the European String Teachers Association (Switzerland).

He performs as a soloist and a chamber musician in some of the most prestigious concert halls around the world, among which are Queen Elizabeth Hall (London, England), Concertgebouw (Amsterdam, Netherlands), Musikverein Wien (Austria), Konzerthaus Berlin (Germany), Philharmonic Society Concert Hall (Prague, Czech Republic), Cité de la Musique and Radio France Concert Hall (Paris, France), Victoria Hall (Geneva), Tonhalle Zurich (Switzerland), Lutoslawski Concert Hall (Warsaw, Poland) and many others. D. Severin collaborates with some of the most distinguished ensembles and musicians. He is a frequent guest artist at classical music festivals in Germany, Austria, France, Spain, Belgium, Poland, Turkey, Singapore, China and Brazil.