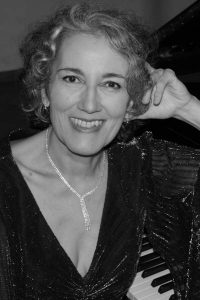 Daniela Willimek (née Daniela Steinbach), who was born in Bretten, Germany, studied music in Karlsruhe, Germany (piano with Sontraud Speidel) and Vienna, Austria (piano with Leonid Brumberg) with a major in piano performance. She attended masterclasses with Tatjana Nikolaijewa, Halina Czerny-Stefanska, Stefan Askenase and Jean Micault.
She completed her degree with honors. Daniela Willimek has received scholarships from the German National Academic Foundation (Studienstiftung des Deutschen Volkes), the Richard Wagner Scholarship Foundation of Bayreuth and the Brahms Society of Baden-Baden.

She has won prizes and awards in national and international competitions and initiated a series of CDs entitled Faszination Frauenmusik featuring piano music by female composers.

She works as a lecturer in the field of piano at the Karlsruhe Hochschule für Musik.
In conjunction with her husband, Bernd Willimek, she designed and conducted international study on the emotional perception of musical harmonies, “Music and Emotions – Research on the Theory of Musical Equilibration (die Strebetendenz-Theorie)”, translated from the German in 2013.

She has held lectures on this topic in Germany, Austria, Croatia, England, Russia and Japan and is currently writing her dissertation on the emotional perception of musical harmonies at the Karlsruhe University of Music.