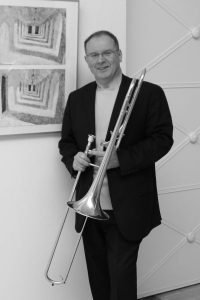 In 1980, age 20, Chris toured with the London Symphony Orchestra under Maestro Celibidache at the invitation of Denis Wick and was appointed Principal Trombone of the Orchestra of Opera North in the following year, a seat he held for twenty seven years. He has since appeared as Guest Principal with most major UK ensembles including the London Symphony, London Philharmonic, Royal Philharmonic, Royal Opera House Covent Garden and London Brass and still plays regularly with the Mahler Chamber Orchestra, Philharmonia, MusicFabrik, Scottish Chamber, Superbrass and the Symphonic Brass of London. A graduate of London’s Guildhall School of Music, he studied with Denis Wick, Eric Crees and Peter Gane, and was awarded the Principal’s Prize.

Currently Professor of Trombone and Brass Ensemble at the Folkwang University of Arts, Essen, Germany and Visiting Tutor at London’s Guildhall School of Music & Drama, he has also served as Head of Brass at the Royal Birmingham Conservatoire and Senior Tutor in Brass and International Visiting Tutor at Manchester’s Royal Northern College of Music and was voted 2014 Teacher of the Year by the British Trombone Society. He has trained the low brass with the Gustav Mahler Jugendorchester, European Union Youth Orchestra, Junge Deutsche Philharmonie and National Youth Orchestra of Great Britain and gives recitals and masterclasses throughout the world, including the Joseph Alessi Summer Seminar, Juilliard, Eastman and conservatoires in Boston, Texas, St Petersburg, Moscow, Porto, Oslo, Aarhus, Riga, Budapest, Cordoba, Bern, Lausanne and Ankara. Chris has also served as outside assessor at many European Conservatoires and Universities.

In 2003 Chris represented the UK in the World Orchestra for Peace under Valery Gergiev and has made concerto appearances with the Netherlands Symphony Orchestra, Durham Sinfonia, Helix Ensemble and Orchestra of Opera North with whom he performed the Elgar Howarth Concerto under the composer on his 70th Birthday. Currently Chairman of the International Trombone Association Executive Board and a former President of the British Trombone Society, he has hosted the IPV Symposium 2010 in Essen and appeared as guest artist at International Trombone Festivals in Nashville, Aarhus, Birmingham, Las Vegas, Slide Factory Rotterdam, IPV Symposiums in Rostock, Aachen, Hannover and Stuttgart, Adams and Lätzsch Festivals in the Netherlands and International Festivals in Washington DC and Sweden. His debut solo CD entitled Houlding his own was issued in 2008 on the SRC label and a second Duet Album Houlding it together is now available on the ITA Website featuring Joseph Alessi, Brett Baker, Ben van Dijk, Carol Jarvis, Niels Ole Bo Johansen, Don Lucas, Ansgar Striepens and Jiggs Whigham.