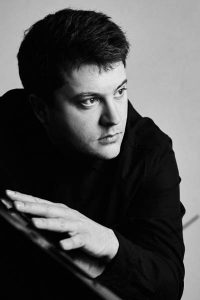 Christian Erny, born in Winterthur in 1988, studied piano and conducting at the Zurich University of the Arts, the Jacobs School of Music and the Lucerne University. His teachers included Hans-Jürg Strub, Jean-Louis Haguenauer, Markus Utz and Howard Arman. At the Jiri Hlinka Piano Academy in Norway he also received support from Leif Ove Andsnes and Eldar Nebolsin.

Concerts as a pianist have taken Erny to many countries in Europe, the USA and South America. He has made highly acclaimed recordings of works by Lourié, Debussy, Liszt, Mozart and Schoenberg, which have received awards such as the Gramophone Editor’s Choice and a nomination for the German Record Award.
He is a laureate of the international piano competition Île de France and recipient of the cultural award of his hometown Winterthur.

Christian Erny is a passionate and sought-after pedagogue. He teaches a large class for piano at the Basel Hochschule für musik and he is head of the precollege department at the pedagogical and artistic seminar in Kreuzlingen. He has also taught as a guest at the Renaissance Arts Academy in Los Angeles and at the Collegio Suizo in Santiago de Chile.

Christian Erny is artistic director of the vocal ensemble The Zurich Chamber Singers, with which he has enjoyed great international success since its founding in 2015. He is a welcome guest conductor with the Morphing Chamber Orchestra in Vienna or the Orchestra of Europe in Zurich. He has also conducted the Bavarian Radio Choir or the Lucerne Festival Strings. He made his opera debut at the Lucerne Theater in 2019.