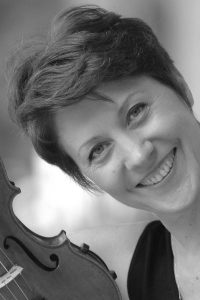 Trained at the National Conservatory of Music in Paris by Michèle Auclair, Annick Roussin obtained a 1st Prize for violin and chamber music in 1977.

She began a career as a soloist around the world, after having obtained several Grands Prix in international competitions (Long-Thibaud in 1979, Geneva in 1980, Tchaikovsky in 1982). She has performed with orchestras such as the Orchester de la Suisse Romande, the Basel Collegium, the Westfalisches Sinfonie Orchester, the Frankfurt and Stuttgart Radio Orchestra, the Limburgs Symphonic Orkest, the Moravian Philharmonic, the Monte-Carlo Philharmonic Orchestra as well as various French orchestras such as the Ensemble Orchestral de Paris, the Lyon National Orchestra, the Toulouse Capitole Orchestra, the Pays de la Loire Philharmonic Orchestra.

Critics salute her unanimously, both for her concerts and for her recordings (Harmonia Mundi, Accord, 3D, Calliope, Grave) with, among others, the Sonatas by Prokofiev, the 3rd Concerto by Saint-Saëns, the Concerto by Philippe Leroux ( creation), the complete works of Szymanowski.

Critics salute her unanimously, both for her concerts and for her recordings (Harmonia Mundi, Accord, 3D, Calliope, Grave) with, among others, the Sonatas by Prokofiev, the 3rd Concerto by Saint-Saëns, the Concerto by Philippe Leroux ( creation), the complete works of Szymanowski.

Very interested in teaching, Annick Roussin is currently professor at the École Normale de Musique Alfred Cortot since 2018.
From September 2014 to June 2018, she taught violin as an Associate professor at the Faculty of Music of the University of Montreal.
She was a violin teacher at the National Superior Conservatory – CNSMD in Lyon from 2000 to 2009 and at the National Conservatory – CRR in Paris from 2007 to 2014.
She was also an assistant in the chamber music class of Christian Ivaldi and in the violin classes of Alain Moglia and Boris Garlitsky at the CNSMD in Paris.
Annick Roussin carries out masters classes in Finland, the USA, Canada, Korea, Austria.

Many of her students hold positions as solo violin or violin members in orchestras such as the Philharmonic Orchestra of Radio France, the Paris Opera Orchestra, the Lyon National Orchestra, the Berlin Radio Orchestra, Lausanne and Geneva Chamber Orchestras, the Luxembourg Orchestra.

Very sensitive to bodily expression, she has long practiced dance (classical, modern-jazz, and contemporary), mime and the Feldenkrais Method. These parallel experiences allowed her to considerably enrich her approach to the violin and music and, thus, to bring new perspectives to her pedagogy.