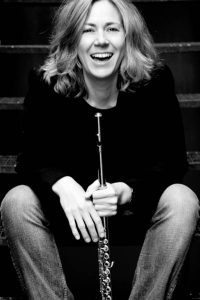 Anne-Cathérine Heinzmann enjoys an outstanding reputation as a versatile soloist, highly sought-after chamber musician, and committed flute teacher.
She has been a guest in various concerts and international festivals during the last years and counts in the meantime among the most renown german flutists of her generation.
Grewing up in Hamburg she comes from a traditional musician family and studied first in the international renown fluteclass of Professor Jean-Claude Gérard (Stuttgart) and was later educated of teachers of the same reputation as Professor Jeanne Baxtresser (New York) and Professor Michael-Martin Kofler (Salzburg).
In addition she received important influences from Aurèle Nicolet and Paul Meisen.

She is a prizewinner of many national and international competitions (International Kuhlau Competition, Flute-Talk Chicago, International Flute Competition Budapest a.o.) and was supported by the „Studienstiftung des Deutschen Volkes“, the chamber music foundation „Villa Musica“, the „Deutsche Stiftung Musikleben“ and was promoted by the important foundation „Deutscher Musikrat“.

She gathered several years of valuable orchestral experience as assistant principal flute of the Frankfurt Opera Orchestra.
Apart from her soloistic activity she dedicates herself substantially to the chamber music.
With her ensemble the Trio Charolca she shows en engaged concert activity and performs an extensive concert schedule and is gradually gaining a reputation as one of the leading ensembles of its kind.
An interest in new music as well as an enthusiasm for exploring new sounds form the basis for their contrasting and intelligent programmes.
In addition, the trio collaborates with composers such as Sofia Gubaidulina and the late Harald Genzmer, opening new perspectives and inspiration for their concerts.

The flutist shows an active international concert activity, which led her to the Laeiszhalle Hamburg, the Semperoper in Dresden, to the Rudolphinum in Prague, to the Schleswig-Holstein Music Festival and to the BBC PROMs concerts in London, to the Alte Oper Frankfurt, to the Ludwigsburger Schloßfestspiele, the Heidelberger Frühling, the Mozartfest Würzburg, the Biennale Munich and to MusicaMallorca.

2009-2018 she has been professor for flute at the Hochschule für Musik Nürnberg, where she taught an exceptionally successful flute class.
Since 2018 she was appointed Professor for flute at the worldfamous Folkwang University of Arts in Essen, Germany.
Due to her passion for teaching she became in the meantime a well known teacher at numerous master classes and as a member in Jurys worldwide.

Anne-Cathérine Heinzmann is in equally great demand as a chamber musician.
To her chamber music partners count soloists of international orchestras and ensembles, in addition she played with Leonard Hokanson, Miriam Fried, Paul and Gustav Rivinius, Aurèle Nicolet, Erik Schumann, Caroline Widmann and the Mandelring Quartett.

A CD recording of works by Harald Genzmer played by the Trio Charolca was published in 2012 (Thorofon), followed by her Debut recording with works for flute and piano with her duo partner Thomas Hoppe (Audite 2013), which was right away nominated for the International Classical Music Award 2014 (ICMA).
An album with Bach Arias (Daniel Behle, Tenor) and the Partita for Soloflute was released at Sony Classical and attracted great attention.
In November 2015 a release at Audite with works from jewish composers, who had been ostracized in the era oft he National Socialism, had been successfully published and was nominated for the prize of the ‘German Record Critics’ award 2016.

Anne-Cathérine Heinzmann plays a Muramatsu all 18K flute.
She lives with her family and her two kids in Munich.