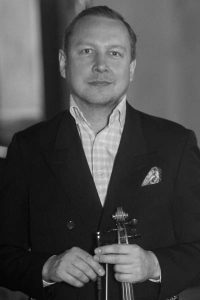 Anders started to play the violin when he was eight years old. He continued his studies at the Royal College of Music in Stockholm in the class of prestigious professor Harald Thedéen. Four years of studies succeeded with admission to the “master of fine arts” at the same college. Following additional studies in Vienna and Stockholm he made his soloist debut with the Swedish Radio Symphony Orchestra playing Béla Bartók’s Violin Concerto No. 2.

As a chamber musician Anders has made several recordings for Swedish Radio. He has also appeared at the Chamber Music Festival Austria, which resulted in recordings for Austrian radio, ORF. As a member of various chamber music constellations, Anders has played in China, Brazil, Argentina, Peru, Ecuador, Austria, Germany, France and Norway. He has taught Master classes in Austria and Brazil. In 2018, he will also perform in Holland, Israel and Finland.

He is regularly active as a chamber musician throughout Sweden with many of  the finest musicicans in Europe. Since 2005, he has been hosting festivals in Sweden and he is founder and artistic director of  the concert series ‘Musik på Udden’ (Music at The Cape) at Royal Prince Eugens Waldemarsudde in Stockholm, one of the most famous concert series in Sweden with chamber music, art and poetry linked to each other.

He has been rewarded the “Swedish royal academy reward”  in national violin competition and often praised for his noble sound and art.