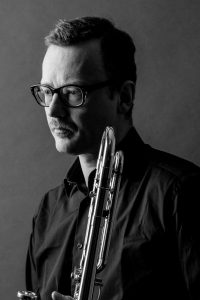 Born in 1977 in Metz, Alexandre Faure began learning the trombone at Harmonie de Woippy, then continued his musical studies at the CRR – National Conservatory of Metz Region in Gilles Senon’s trombone class.
In 1993, at the age of 16, he joined the CNSMD – Conservatoire National Supérieur de Musique de Lyon in the class of Michel Becquet and Alain Manfrin, thus becoming one of the youngest students having entered this class. He obtained the National Diploma of Higher Studies of Music with honors and unanimous congratulations from the jury CNSMD Lyon.
In June 1998, he also won the Antoine Courtois special prize.

He recorded with Michel Becquet and the trombone-tuba ensemble Octogone as well as the Trombone Quartet “Kimoïz” at Octavia Records Inc. in 2005 and 2007.

Since 1998, Alexandre Faure has been Trombone Solo of the Orchester de la Suisse Romande.