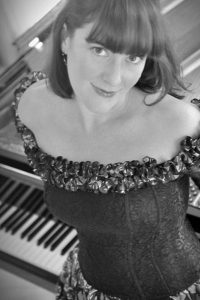 Alexandra Lescure is regularly invited to play in recital and as a soloist in France and abroad (United States, Brazil, Austria, Hungary, Romania, Moldova, Malta).

Alexandra Lescure played in duet with François Rossé, pianist composer and improviser. She is professor of piano at Cabriès.

She is co-artistic director and co-founder of the International Festival Les Nocturnes Sainte-Victoire. She also performs with the musicologist and composer Etienne Kippelen on stage, currently, she is the pianist of the Chopin show that runs since the end of 2016.

She has been studying with Michel Bourdoncle, Jacques Rouvier and Prisca Benoit as well as Bruno Rigutto in a preparation class for the International Competitions at Marseille Conservatory. She improved with pianist Bernard D’Ascoli “piano cantabile” class in 2002.
In addition, she followed the course of Prisca Benoit, Jacques Rouvier and Dang Thai Son. She participated in numerous master classes with such pianists as Konstantin Lifschitz, Dominique Merlet, Imogen Cooper, Carlos Roque Alsina, Jean-Marc Luisada and Liouba Timofeyeva …