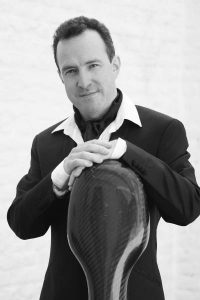 As a soloist and in chamber music, Aleksandr Khramouchin performs in concert halls such as the Concertgebouw in Amsterdam, the Salle Gaveau in Paris, the Alte Oper in Frankfurt, the Cologne Philharmonie, the Konzerthaus Berlin, the Wigmore Hall in London and the Tchaikovsky hall in Moscow. His close partnership with “Timpani Records”, among other companies, has led to several recordings, including the complete chamber music of Gabriel Pierné with pianist Christian Ivaldi, the first recording of Jean Cras’cello sonata with pianist Alain Jacquon and Maurice Ohana’s cello works with pianist Pascal Devoyon. All his recordings have received numerous awards and continue to be highly acclaimed in the international press.

Born 1979 in Minsk (Belarus) into a family with deep musical traditions, Aleksandr Khramouchin received his first cello lessons at the age of 4 from his father, a brilliant violinist, who also continued to guide Aleksandr in his understanding of musical language and in developing his own musical style during the following years.

Alongside his performing activities, Aleksandr Khramouchin is permanently giving Masterclasses in the most important institutions and has occupied Professor position at the International Mundi School in Waterloo (Belgium) until 2021.

In 1985, he entered the class of Vladimir Perlin at the “Special Music School for advanced students” at the Conservatory of Music in Minsk. After coming to Belgium in 1992, he continued his studies with Professor Hans Mannes at the Royal Conservatory of Antwerp. Encounters with Janos Starker, Natalia Schakhovskaya, Boris Pergamenschikow and others marked his musical apprenticeship. At the age of 19, he became First Solo Cellist at the Orchestre Philharmonique du Luxembourg, where he played until 2019. Music critics are unanimous in praising Khramouchin’s unforgettable, highly individual performing style, the broad scope of his interpretations, and his faultless technical mastery.