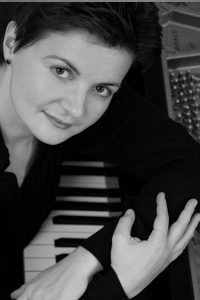 With her inspired and very personal playing, her subtle sense of sound and her virtuoso fury, Susanne Grützmann is one of the main pianists of her generation.

She has won prizes at major international competitions, such as the rarely awarded first prize at the highly regarded ARD competition in Munich and prizes at the Robert Schumann Competition in Zwickau, the Concurso Vianna da Motta in Lisbon and the Johann Sebastian Bach Competition in Leipzig.

Among the conductors who have worked with Susanne Grützmann are Wolfgang Sawallisch, Kurt Masur, Sylvain Cambreling, Hartmut Haenchen and Hans Zender. Susanne Grützmann has given numerous solo evenings in major national and foreign music centers, including the Herkulessaal in Munich, the Semperoper in Dresden, the Stuttgart Liederhalle, the Beethovenhaus in Bonn and is a regular guest at the Konzerthaus in Berlin (including a cycle Schumann in three parts). As a sought-after chamber music partner, she has performed with the Berlin String Trio, the Ma’alot Quintet, and the Albert Schweitzer Quintet, among others.

She has performed at the Amsterdam Concertgebouw, the Old Opera in Frankfurt, the Cologne Philharmonic Orchestra, the Hamburg Music Hall, the Great Festival Hall in Baden-Baden and the Berliner Festwochen. She has performed on several occasions Beethoven’s cycle of five piano concertos with the Württemberg Chamber Orchestra in Heilbronn. She has been invited several times to concerts and master classes in China, Taiwan and Sweden.

Susanne Grützmann’s recordings of Chopin’s Preludes Op.28 and Schumann’s Symphonic Studies Op.13 have been published by TELDEC, as well as the Abegg, Papillons and Davidsbündlertänze Variations, the Kreisleriana, the Fantasy in C major, the Arabesque piece and floral, Sonata in F sharp minor, Fantasiestücke opp. 12 & 111 by Robert Schumann, as well as the recording of the entire solo work by Clara Schumann on four CDs (Editor’s Choice of the British gramophones).

For many years, Susanne Grützmann has devoted herself to the training of young musicians and has taught at the “Hanns Eisler” University of Music in Berlin.