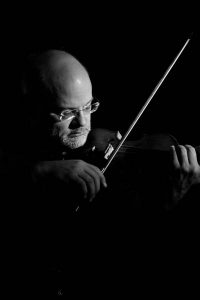 Professor of violin at the Hochschule für Musik und Theater in Hamburg – studied as one of the first pupils of german Violinist Ulf Hoelscher in Karlsruhe. A scholarship grant from the German Academic Exchange Service (DAAD) allowed him to continue his studies in Bloomington, Indiana (USA) under Nelli Shkolnikova and Josef Gingold. Masterclasses with Christoph Poppen (Bonn), Yfrah Neaman (London) and Vladimir Landsman (Montréal) as well as numerous chamber music courses with teachers like Thomas Brandis, Serge Collot, Henry Meyer and Sigmund Nissel rounded his formation.

As First Violinist of the Mandelring String Quartet, Sebastian Schmidt won the international Competitions in München (ARD), Evian (France) as well as the Paolo-Borciani-Competition in Italy. Since then, he has toured extensively with his quartet, performing in cities and venues all over the world, such as London, Paris, Madrid, Berlin, New York, Los Angeles, Buenos Aires, Lima, Osaka and Tokyo. Many CD recordings were released to critical acclaim.