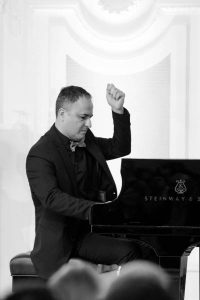 Brazil-born pianist Roberto Domingos completed his piano studies with Henriqueta Duarte at the College of Music and Arts of Paraná with distinction. After winning several awards in national music competitions, he decided to continue his studies in Germany.
With scholarships received from the German Academic Exchange Service DAAD and the Brazilian National Council for Scientific and Technological Development CNPq, Domingos was able to pursue a post-graduate course at the University of Music Karlsruhe with Fany Solter and Dinorah Varsi in performance, from which he graduated with a concert exam. Ulrich Rademacher was his professor on a course of Lied Accompaniment, which again he completed with distinction. A further scholarship from the Brazilian-Soviet Cultural Exchange took him to the Tchaikovsky Conservatory in Moscow where he studied with Rudolf Kehrer.
In 1993, Domingos became an associate professor for piano at the University of Music in Karlsruhe and has been active in the university’s Academic Senate since 1999. In July 2007, Domingos was appointed professor for piano at the University of Music Karlsruhe for his achievements and his meritorious work.
In addition to his committed work at the university, he has been teaching at seminars and master classes both in Germany and abroad, and has been a jury member in various piano competitions. He also works as a piano teacher for the Kunst- und Musikschule Westlicher Enzkreis (Art and Music School of the Western Enz District). Many of his students and pupils have been awarded several prizes in various national and international music competitions.
Domingos has performed as a soloist, chamber musician and Lied accompanist with various esteemed partners and orchestras in South America, Germany, Spain, the United Kingdom, Poland, Greece, Russia, Switzerland and Albania.l, China and Korea.His varied musical activities also include recordings for Brazilian, Polish and German radio and television. In 2002, Domingos published a CD recording with the cellist Stefan Heinemeyer.
Roberto Domingos is full time Professor at the Hochschule für Musik Karlsruhe.