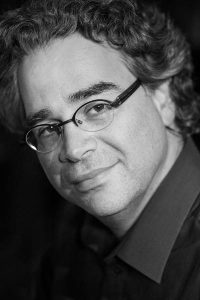 Victoire de la Musique in 2005 in the “Instrumental Soloist Revelation of the Year” category, Pascal Amoyel was awarded a Grand Record Prize in Warsaw in 2010 by the prestigious Chopin Society for his complete Chopin Nocturnes alongside Martha Argerich and Nelson Freire. His interpretation of Liszt’s Funeral was also hailed as one of the historical references, and his Poetic and Religious Harmonies by Liszt voted among the 5 best recordings of 2007 by the Arte channel.

At the age of 10, when he began his piano studies at the Ecole Normale de Musique in Paris (class of Marc André), he was quickly noticed by Georges Cziffra, whom he followed in France and Hungary. At 17, after a scientific baccalaureate, he decided to devote himself entirely to music. At the same time as his studies, he performed improvising in the cabarets of Montmartre. He obtained a concert license from the Ecole Normale de Paris, the First Prizes in Piano and Chamber Music at the Conservatoire National Supérieur de Musique in Paris (class of Jacques Rouvier and Pascal Devoyon), became Laureate of the Menuhin and Cziffra Foundations, then won the First Prize at the International Competition of Young Pianists in Paris. He also receives advice from Daniel Blumenthal, Aldo Ciccolini, Lazar Berman, Maria Curcio, Véra Gornostaeva, Dominique Merlet, Déré N’Kaoua, Jacqueline Landowski, Lev Naoumov.

It was the start of an international career that led him to perform on the biggest stages: Berlin Philharmonie, Muziekgebouw in Amsterdam, Beaux-Arts Palace in Brussels, Cité de la Musique and Pleyel Hall in Paris, United States, Canada, Russia, China, Korea …

His recordings alone or with the cellist Emmanuelle Bertrand have obtained the highest awards: Gramophone, Cannes Classical Awards, ffff from Télérama, Diapason d’Or of the year, “Choc” from the world of Music, 10 from Classica, Grand Prix annual of German criticism …

As a composer, Pascal Amoyel is laureate of the Banque Populaire Foundation. He is notably the author of the cycle Job, or God in turmoil and Letter to the beloved woman on the subject of death (on poems by Jean-Pierre Siméon).

He is also involved in the creation of new forms of concert: his show “Block 15”, or “Music in resistance” (directed by Jean Piat) has been described as “very pure and touching research” by the director Peter Brook and has been adapted for France Télévisions. He also wrote and created the only staged “The 50-Finger Pianist” or “the Incredible Destiny of György Cziffra”, “The Day I Met Franz Liszt”, and “Looking for Beethoven” (directed by Christian Fromont) which were performed at Ticket offices closed at the Avignon Festival and for several months at the Théâtre Le Ranelagh in Paris, as well as the family show “Une petite histoire de la grande musique”. As an actor, he collaborated and gave the answer to Jean Piat, Francis Huster and Brigitte Fossey.

He created the Juniors Festival in which children are the actors, including those with disabilities, directs the Notes d’automne festival that he created, and is the productor of more than fifty creations (with Jean-Pierre Marielle, Barbara Hendricks, Natalie Dessay, Eric-Emmanuel Schmitt, Raphaël Enthoven, Mathieu Kassovitz, Richard Bohringer, Anne Roumanoff, Jacques Gamblin, Patrick Bruel…).

First Grand Prix “Arts-Deux Magots” rewarding a musician with qualities of openness and generosity, Jean-Pierre Bloch de la Licra Prize for “the relationship to human rights in his work”, Gold Medal for outreach cultural heritage of the French Renaissance, he is the godfather of the APTE association, which provides music lessons to autistic children.