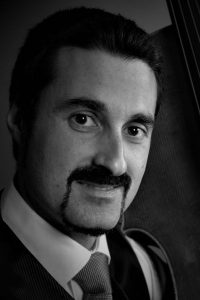 During his last year at the conservatory he was appointed Cello Solo – First Cellist at the National Orchestra of Belgium, at the age of 24. This allowed him to work with a multitude of conductors and soloists of international renown like Valery Gergiev, Walter Weller, Hugh Wolf, Pinchas Zukerman, Vadim Repin, Misha Maisky, Hélène Grimaud and others.
Since e then, he performed in chamber music appearances in numerous countrys and festivals such as ‘Schiermonnikoog Festival’ in Netherlands, the ‘Different trains Festival’ in Albania, the ‘Gjövig Musicfest’ in Norway , the ‘Excellent Concerts’ in the Netherlands and others.
He performed in recitals with the pianists Daniel Blumenthal, François-René Duchable, Adam Laloum, Liebrecht Vanbeckevoort, Piet Kuijken, Desar Sulejmani and Peter Caelen.
As a soloist, he played with many orchestras the concertos of P.I. Tchaikovsky, A. Dvorak, R. Schumann, E.Lalo, M. Bruch, W. Bargiel. J.Brahms and more.
The interpretation of the concerto ‘Tout un monde lointain …’ by the French composer Henri Dutilleux was another career highlight. After preparation of the oeuvre with the composer in his Parisian Ile Saint-Louis studio, the work was played and recorded live in Brussels in his presence. The composer said it was one of the best interpretations he had ever heard.
In 2007 he was appointed cello Professor at the Royal Conservatory of Antwerp and in 2015 he was appointed cello Professor at the Royal Conservatory of Brussels. He is regularly invited for cello masterclasses in Belgium, the Netherlands, Spain, Lithuania, Latvia, Poland, Romania, Italy France and more.
In recent years, Olsi Leka has devoted himself to the development of personal projects such as recording CDs for various record companies. His last CD “The cello in Madness” is produced by the belgan label Phaedra, présenting a compilation of unknown belgian cello works as well as some virtuosity pieces like the sonata in D of Pietro Locatelli (1695-1764) arranged by the famous cellist Carlo Alfredo Piatti (1822-1901).
He plays an exceptional cello crafted by the Italian violin maker Raffaele Gagliano around 1820, and graciously made available by the Éric Feldbusch Foundation. This cello was donated to Eric Feldbusch in 1965 by Queen Elizabeth of Belgium on the occasion of the creation of the piano trio bearing her name.