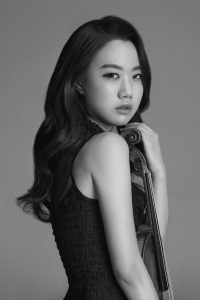 “She performs with sincerity and passion” -Philip Setzer, Emerson Quartet
“Performance reflects the depth of interpretation, musicality….needed to distinguish oneself in the world of professional performance” -Barry Alexander & Cosmo Buono, ABI Foundation

Naria Kim is a graduate of the Korea National University of Arts through the early entrance program for gifted, Yale School of Music. She also obtain a Master of Music and Artist Diploma with Hyo Kang and Stony Brook University and became Doctor of Musical of Arts with Philip Setzer on full scholarship, stipend and teaching Assistantship.

Naria Kim has served as Violin Faculty at the Stony Brook University, Naugatuck Valley Community College and Lecturer of Violin at Chung-Ang University and Korea National University of Arts in Korea. Currently, she is a Lecturer of Violin at Chung-Ang University and an active judge for numerous international and national competitions.
As an international teaching artist, she has been invited for Master Classes and faculty member of International Music Festivals including the Korea Soriter Arts Center, Euro Music Academy-Korea 2017/2019, Italy Cremona Summer Festival-International Academy of Arts, Iowa Luther College Master Class and the Chinese University of Hong Kong Master Class to name a few.