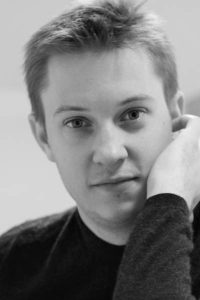 Médéric graduated from the Lille CRR in bassoon, harpsichord,

In 2003, he was admitted to the National Superior Conservatory – CNSMD in Paris in the class of Marc Trenel. In 2007 he obtained a prize for German bassoon and chamber music while continuing to enrich his training through the practice of baroque bassoon and Gregorian singing.
He then entered the concert performance cycle in the classes of Gilbert Audin and Lionel Bord before completing a Master Orchestra in 2010 at the Hochschule – HEM in Geneva with Afonso Venturieri.

Médéric has the opportunity to play regularly as a soloist (concerto for bassoon by Mozart with the orchestra of the National Conservatory – CRR in Lille, concertante Symphonie by I. Pleyel with the Orchestra of the Laureates of the Paris Superior Conservatory – CNSMD, etc.).
In 2008, he recorded the Hummel Grand Concerto for bassoon with orchestra.

At the same time as these studies, in 2005 Médéric Debacq obtained a position as bassoonist with the Mobile Gendarmerie orchestra, and in 2012 he played as a solo bassoon with the Ulster Orchestra (Northern Ireland).