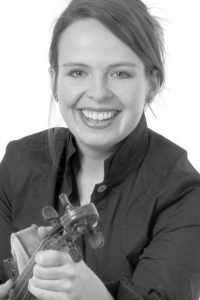 “There’s a musician at work who is in love with every note she plays and improvises, which leaves nothing routine, only experienced with her fellow musicians and acting technically and artistically at the highest level.” (Critic of the Basler Zeitung for the CD of Händel’s violin sonatas recorded in 2012 by Deutsche Harmonia Mundi)

Julia Schröder received her first violin lessons from her father, and piano lessons from her mother. At the age of 15, she
entered the conservatory “Gasteig” in Munich and two years later the Musikhochschule Basel together with Adelina Oprean.

Further studies led her towards Walter Levin and Hatto Beyerle, Rapheal Oleg, Lukas Hagen (Hagenquartett, Salzburg). Chiara
Bancchini was her teacher for the baroque violin at the Schola Cantorum Basiliensis.

Julia Schröder is a concertmaster and director of the Kammerorchester Basel since 2004. Under her leadership the ensemble played in major concert halls in Europe such as the Vienna Musikverein, the Berlin Philharmonic, the Concertgebouw in Amsterdam, the Cité de la Musique in Paris and the Barbican Center in London. In parallel she is a soloist accompanying artists such as Sol Gabetta, Giuliano Carmignola, Angelika Kirchschlager, Andreas Scholl, Giuliano Sommerhalder, Pieter Wispelwey, Angela Hewitt, Núria Rial, Franco Fagioli and Cecilia Bartoli.

In 2010 she was called at the Musikhochschule Freiburg (D) to be a violin professor. “Teaching satisfies me when I see young people growing up, not only as a violinist, not only as a musician but also as a human being. For me the way to a professional musician is also the way to the heart of his own humanity.” (Julia Schröder).

Julia is now a modern and universal musician, feeling comfortable in the world of modern violin as well as in the style of baroque play, while being also at ease in the improvisations of Jazz and she likes to play tango, too.