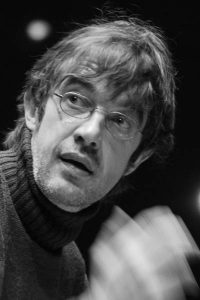 Since being a laureate in the Brussels Queen Elizabeth Competition 1991 Jan Michiels has been known for his very personal and multi-layered approach to the piano repertoire, combining old and new in always changing perspectives.

Numerous recordings testify his activity – to quote but a few, ‘Lost in Venice with Prometheus’, ‘The War of the Romantics’ or ‘Slavic Soul’ (all published by Fuga Libera) contain music from Bach till today seen from the position of a performer composing his programs through a continuous dialogue with living music history. Jan Michiels worked indeed closely with composers such as a.o. G.Kurtág, H.Holliger, H.Lachenmann, K.Goeyvaerts, K.Huber, R.Groslot and K.Defoort. One of his main inspiration sources is Luigi Nono, who stood at the centre of his doctorate in the Arts ‘Teatro dell’Ascolto’ (2011).

He regularly performs in prestigious venues all over Europe and Asia. Apart from the ‘ritual recitals’ mentioned below he realized several complete cycles such as all Beethoven Sonatas, all works from the 2nd Viennese School, all Debussy, all Bartok, all Brahms (piano solo and chamber music with piano).